The 19th Annual New York City Canstruction® Competiton and Exhibition was a great success. The complete list of winners and jurors can be found below. All structure photos by Canstruction/Kevin Wick. Photo of this year's jurors by Sunny Norton

The New York City Canstruction® Competition has completed its 19th year thanks to the hundreds of volunteers, contributors and participants who dedicate their time and talent. The exhibition took place in the Winter Garden of the World Financial Center, 220 Vesey Street and the West Side Highway. This year the structures provided enough food to feed nearly 60,000 hungry New Yorkers and with an additional 20,000 fed through contributions from the public. The New York City competition was Co-Presented by Canstruction New York, Inc., the Society for Design Administration New York Chapter, the AIA New York Chapter and arts>World Financial Center. Click on the image below to view a virtual tour of images of all Canstruction New York 2011's entries (click on the image below). 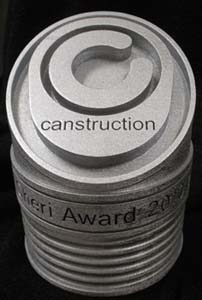 The Cheri Award was given to Eleanor Roosevelt High School / Sandra Forman Design for their entry Strike Out Hunger. This was the second annual awarding of this prize named for Canstruction Founder, Cheri C. Melillo. Each year the criteria for this award changes and is awarded by the organizing committee or its agents. Cheri's son, Brion van Over, and husband, Bruce Melillo picked the winner based on Cheri's wish, especially in the last few year's of her life, to get students in schools around the world engaged in the design process while heightening their awareness of the issue of hunger throughout the world. Congratulations to all of our winners and thank you to everyone who made the 19th Annual New York City Canstruction Design/Build Competition possible. 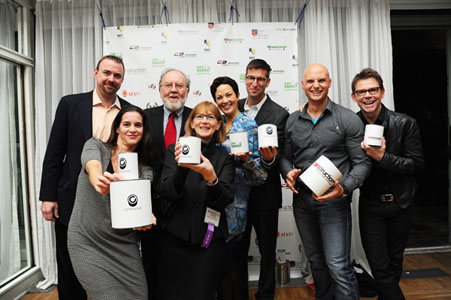 The 2011 jury was comprised of:
Contact us at email@CanstructionNY.org if you have any questions or comments.